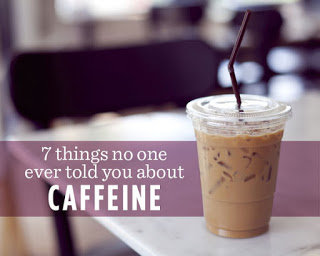 It'll come as a shock to you. As per Food and Drug Administration (FDA), 80 percent of adults in the United States have caffeine on a daily basis, and the average intake is 200 milligrams (the equivalent of two five-ounce cups of coffee) per day.

1. It'll come as a shock to you. As per Food and Drug Administration (FDA), 80 percent of adults in the United States have caffeine on a daily basis, and the average intake is 200 milligrams (the equivalent of two five-ounce cups of coffee) per day. It is a surprising figure, and most of us don't know much about it ---- other than that it's in coffee and certain sodas, and is an energy-booster.

2. Caffeine sources aren't just limited to beverages. Chocolate is a rich source of caffeine and it can be mixed to nearly any food or substance—so you'll likely find caffeine in a few medications, like Midol. People with a heart condition or hypertension however must check with their doctor prior to having any pain relievers with caffeine.


3. Caffeine has a positive impact on short-term and long-term memory. Recent studies point out it's great for long-term memory, "Around 300 to 400 milligrams per day may protect against cognitive decline and Alzheimer's," says Jaclyn London, MS, R.D., a senior dietician at Mount Sinai Hospital in New York City.

4. Caffeine may enhance athletic performance. To hike performance in a race or a game have  some caffeine about an hour earlier to it. "We're seeing statistically significant increases in alertness and decreases in reaction time," says London.

5. The effects of caffeine are almost immediate. Caffeine makes you alert the instant you have it. "Caffeine very easily crosses the blood-brain barrier, so the central nervous system is stimulated quickly," says London.

6. The caffeine content of coffee varies a lot. As per a study published in the Journal of Analytical Toxicology a 16-ounce Starbucks coffee contained 100 milligrams more caffeine than an equal size from Dunkin' Donuts. According to London a standard serving of coffee usually ranges from 90 to 225 milligrams.

7. The caffeine content of espresso is actually a whole lot less than coffee. Opposed to the general perception amount of caffeine found in  espresso is 40 to 70 milligrams ----  miles below than an  average cup of coffee.

8. Caffeine doesn't actually dehydrate you.  If you believe in FDA ----- this one is another benefit of having caffeine. Its' a diuretic ---- means it hydrates. But, have it in  moderation, and don't stop intake of water.