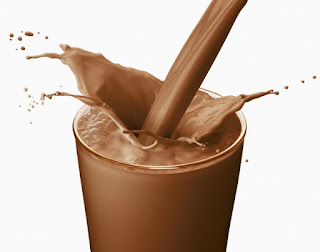 1. Dr. John Ivy  lead researcher on the studies and chair of The University of Texas at Austin College of Education’s Department of Kinesiology and Health Education gives a thumbs-up to  Chocolate milk as an after workout energy drink.

2. ''Volunteers for the study ended up with more muscle and less fat ---- and a much better timings while working out, compared to peers who took carbohydrates-rich sports drinks.'' says Dr. Ivy.

3.  Low-fat Chocolate milk is delicious PLUS offer awesome  physical recovery benefits for young as well as mature athletes after a strenuous workout.

4. Ivy and his research team weighed the recovery benefits of having low-fat chocolate milk post work-out against effects of a carbohydrate beverage having identical ingredients and calories to routine sports beverages PLUS against a no-calorie drink. On drinking low-fat chocolate milk in place of carbohydrate sports drink or calorie-free beverage following a cycle ride for 90 minutes at moderate speed, thereon 10 minutes of high intensity intervals, 10 trained cyclists felt a surge in power and clocked an improved pace. (ride time saw a marked improvement).

5. The study was volunteered by 32 healthy, amateur male and female cyclists. They drank one of the three recovery beverages right after a cycle ride --- then another drink an hour later. After four and a half weeks of cycling athletes who drank  chocolate milk, showed double-improvement in  maximal oxygen uptake

The low-fat chocolate milk drinkers ended up with a better muscle mass and chopped off more fat  during training.